Nearly a Century of Dedication 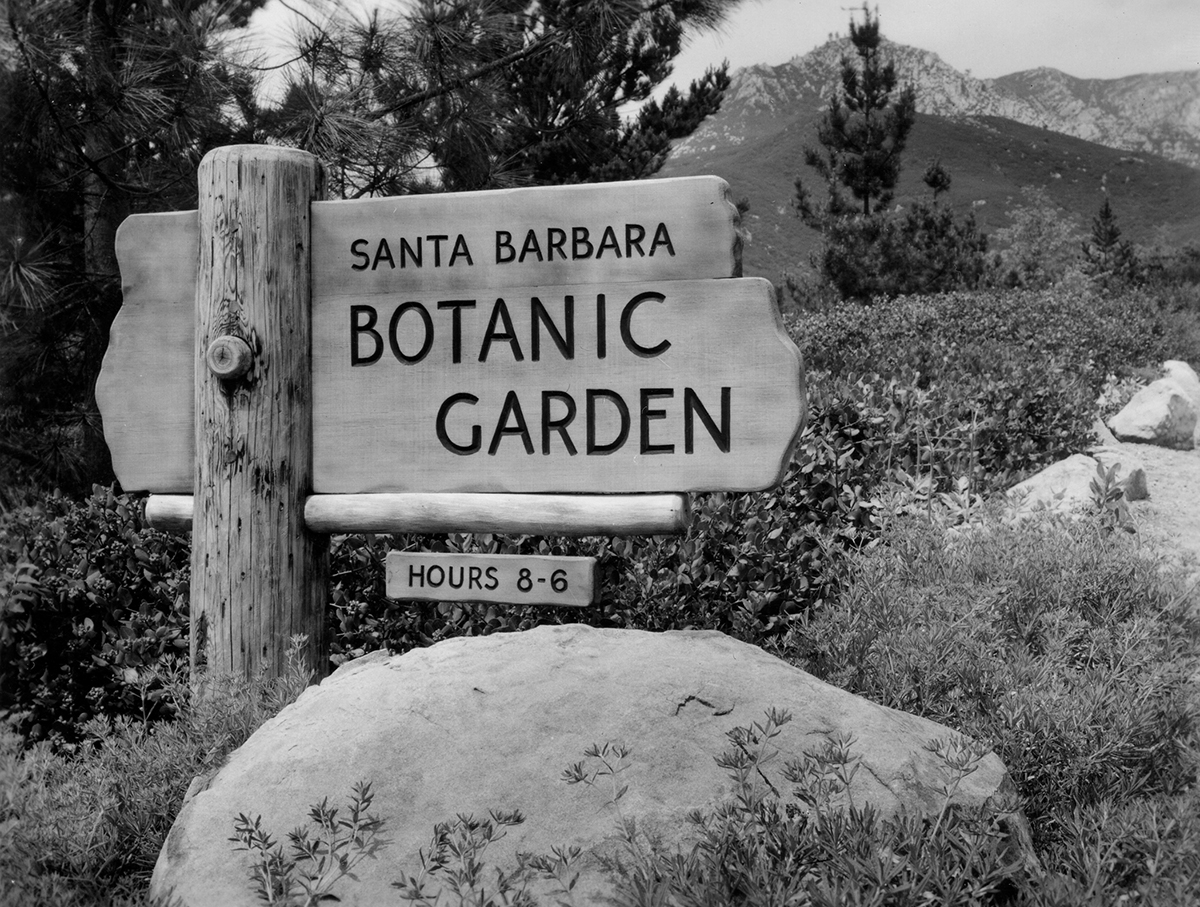 A Collective Passion for the Natural World

At Santa Barbara Botanic Garden, we have remained true to our founding principle — to conserve native plants and habitats for the well-being of people and our planet. We have walked this path from our humble yet visionary beginnings to our world-class collaborations with scientists and architects of the time, and through the destruction and rebirth from wildfire. The Garden’s journey is ongoing.

Origins of
the Garden

The Carnegie Institution suggested a cooperative undertaking with the Santa Barbara Museum of Natural History to administer what it envisioned as a botanical garden “reaching from the sea to the crest of the mountains, connected by a drive lined with trees, shrubs, and flowers from all parts of the earth.”* Plant ecologist Dr. Frederic Clements came to Santa Barbara as Carnegie’s representative in search of geographic sites that could be used for experimental plant research.

Local philanthropist Anna Dorinda Blaksley Bliss purchased 13 acres (5 hectares) in Mission Canyon with the request that it be developed into a botanic garden as a memorial for her father, Henry Blaksley. At the same time, Bliss created an endowment fund to care for the maintenance. The Garden was named after the founder’s father as Blaksley Botanic Garden, and Dr. Elmer J. Bissell was chosen as the first director.

With the substantial endowment given to the Garden by Bliss, followed by the subsequent 11 acres (45 hectares) given by 1932, the foundation for the Blaksley Botanic Garden’s first 10 years of operation was put in place.

The Caretaker’s Cottage, a ready-cut (prefabricated) house ordered from Sears, Roebuck, and Co., was built near the site of the current Blaksley Library. In 1941 it was moved over a large boulder (now gone) to its present location.

By 1936, the Garden’s emphasis had narrowed to plants native to the state of California, and included northwestern Baja California, Mexico, and southwestern Oregon, which are part of the California Floristic Province.

The aim of the founders was to create a garden that would “unite the aesthetic, educational and scientific.”* Based on concepts developed by Clements, the Garden was originally laid out in various plant communities, such as chaparral, desert, and prairie, with an emphasis on plants from the Pacific slope of North America. Experimental groupings of significant genera such as California lilac (Ceanothus spp.) and buckwheat (Eriogonum spp.) were also displayed for horticultural research and to educate the public.

Conversations began between Beatrix Farrand and Lockwood de Forest Jr. about the layout and design of the Garden.

The Garden was incorporated as a separate organization from the Santa Barbara Museum of Natural History and was renamed Santa Barbara Botanic Garden.

The Pritchett Trail was developed in 1940 among chaparral vegetation and provided access to the wooded slopes west of the Canyon Section. The following year, the Campbell Trail was developed with the rustic Campbell Bridge. This trail linked oak woodlands (Quercus spp.) to the west side of Mission Creek with the central part of the garden.

In 1942, the Blaksley Library was built. It was designed by Lutah Maria Riggs with Farrand as a consultant.

Dr. Katherine Muller began as the Garden’s director, ushering a 23-year period of growth and research at the Garden.

Research at Santa Barbara Botanic Garden traces its roots to our first director, Dr. Frederic E. Clements. Clements envisioned the Garden as the first of a series of planting sites ranging from the sea shore to the top of the Santa Ynez Mountains which could be used for investigations of plant adaptations. While Clements’ vision was never fully realized, scientific investigation has been an integral part of the Garden’s identity since its inception.

Our first full-time Director, Dr. Maunsell Van Rensselaer (Director from 1936-1950), strongly encouraged undergraduate research and numerous students participated in research projects led by Garden staff and Research Associates. Several of those undergraduate students followed their experiences at the Garden with a life committed to botanical investigation.

Clif Smith (A Flora of the Santa Barbara Region) and Dr. John M. Tucker, eminent oak systematist at UC Davis, both began their careers as undergraduate researchers at Santa Barbara Botanic Garden. Dr. Reid Moran, who studied the genus Dudleya and later the flora of Baja California, also began his career at the Garden.

During the 1960s, Garden research expanded to include formalized plant exploration of the Channel Islands by Jim Blakely, analysis of past climates in the tree ring lab of Harold Gladwin, and cytogenetic studies of brome grasses by Marta Walters, Ph.D.

In 1967, then Director Ralph Philbrick, Ph.D. convened the first symposium on the biology of the California Islands, and prepared a proceedings publication; this started a tradition that is still going strong with the 11th California Islands Symposium in 2022. Botanical exploration on the islands greatly expanded with the addition of Steve Junak as Herbarium Curator in 1976, and extensive research on island botany, rare plants, and vegetation has continued to this day.

With the addition of Dieter Wilken, Ph.D. in 1993, the Garden’s botanical work expanded to include rare plant conservation on both the islands and mainland and in 1996, the Garden became a member of the national Center for Plant Conservation.

In the early 1990s, Sherwin Carlquist, Ph.D. joined the Garden as a Research Associate and has published prolifically on wood anatomy and island biology ever since. Carlquist was joined on many studies by Ed Schneider, Ph.D., Garden Director from 1992 to 2010. Charis Bratt added lichen expertise in the late 1990s and was joined by Shirley Tucker, Ph.D. in 2003.

Research as of Late

In 2012, the Garden’s research and conservation efforts further expanded to include community ecology with the addition of Denise Knapp, Ph.D., Director of Conservation and Research, who focuses on plant-insect interactions and pollinator networks.

Shortly thereafter, Matt Guilliams, Ph.D. became Herbarium Curator and Tucker Plant Systematist, and established the Garden’s first molecular lab for taxonomic, evolutionary, and conservation genetic research. The Conservation and Research Department has grown rapidly since then, with the addition of Heather Schneider, Ph.D. as the Garden’s first full-time Rare Plant Biologist in 2016, Kristen Hasenstab-Lehman, Ph.D. as Conservation Geneticist in 2017, Rikke Naesborg, and Ph.D. as Tucker Lichenologist in 2019.

This diverse team works to understand, protect, and restore California’s native plants, lichens, and habitats from the level of genes to ecosystems on the Central Coast, the Channel Islands, and throughout California.

History of the Garden

The nation’s first botanic garden dedicated solely to native plants has stayed on the cutting edge of horticulture ever since. This video traces the seed of the dream for the Garden from our founding in 1926 to 2014. It ties together the original pillars — illuminated by our trailblazing visionaries — of education, conservation, and research, all in a beautiful and naturalistic garden setting.

Read more about the rich history of the Garden in “A Garden for All Time: The Santa Barbara Botanic Garden 1926–2005” by Mary Carroll, in Noticias (Winter 2004/Spring 2005), published by the Santa Barbara Historical Society.